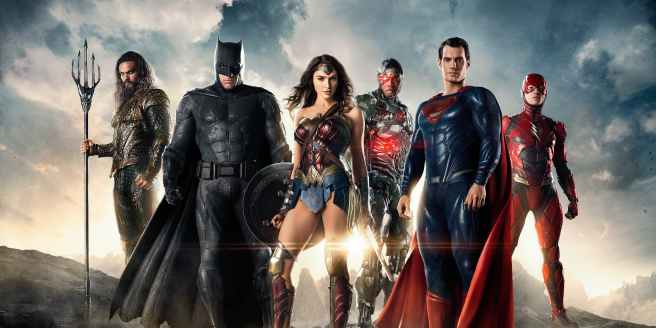 Zack Snyder. Article done, we can all go home.

Honestly I wish it were that easy. We can all agree that Snyder has never read a single comic book or seen a single good DC cartoon and he makes a mockery of the characters. But, the main blame lies somewhere else.

Honestly, as much as I dislike Snyder for what he has done to DC more of the blame rests on the shoulder of the DC/WB executives that are so desperate to have a movie compete with a Marvel film/show they take everything good about the characters in the comics and ruin it by changing them dramatically. WB doesn’t care about the characters or what makes them great characters.

They don’t care if the fact that Superman is not an unfeeling god but really just a chill guy that loves burritos who was raised in Kansas. They don’t care to show that even though Superman is from Krypton he is a human first and Superman second. His character is so much more than his powers, but all mainstream media has really seen him fir is the powers first and Clark Kent second. Just look at the image below and tell me you see an unfeeling god character. 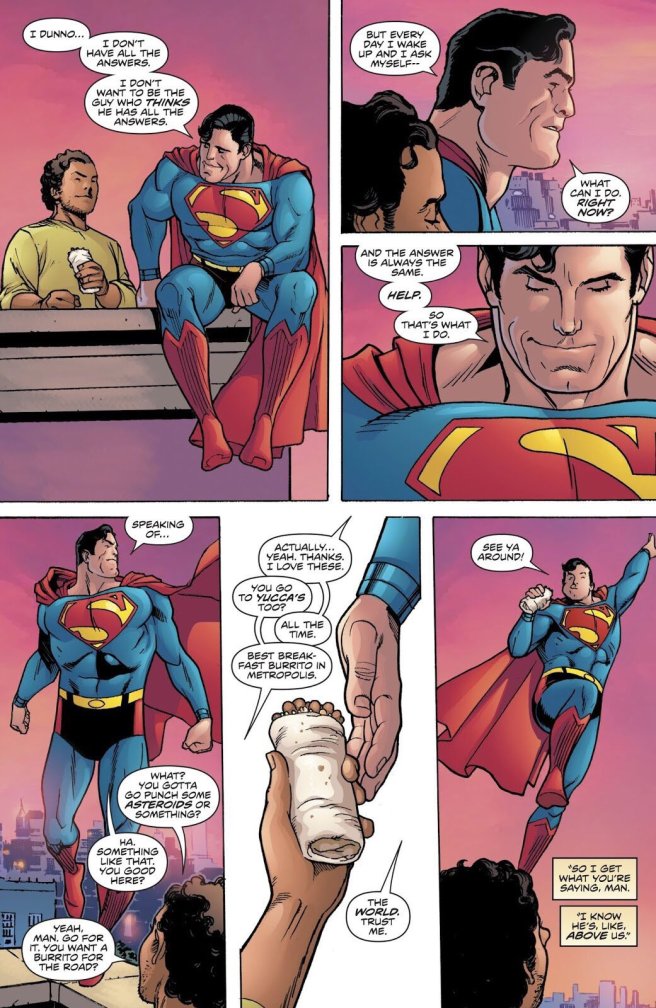 Superman is a good man first and Superman second. Always.

They don’t care that Batman isn’t some gun toting badass à la Red Hood(who is a better character than angry Batman). BvS makes a mockery of the character that I knew and loved when I grew up and read when I was in college. Batman puts life first and this can be seen in the comics. It’s why he raises Dick to not become him. (We’re not going to touch Titans and what Dick Grayson has become.) Like in the Justice League show when he talks to Ace while she is dying and makes sure that she is comforted when she dies. Just watch below and you can get the real sense of the character.

Or recently when he is trying to groom his son, the newest Robin, Damian into not an unfeeling killing machine the Ra’s al Ghul wanted when he trained the boy from birth. Batman may be the most detached because of childhood trauma but that doesn’t mean that his view on humanity is as grim-dark as the DC movies would want you to believe.

Let’s look at the shows and the other problems that comes from them. Everyone is a Batman Dominatrix. Take Arrow for example, Oliver Queen is the most removed from his comic counter part. Green Arrow is more Iron Man in his personality than Batman, but because of Smallville he had to become Batman for legal reasons. He disappears, is dark and moody, and even his costume is dingy and dark. GREEN ARROW IS BASED OF ROBIN HOOD. He is not supposed to be in dark green and sneaking around. Arrow wearing leather is fine it slightly fits the base character, but there is another show in the Arrow-verse that puts the characters in leather that makes no sense.

Flash. Flash runs faster than light. Leather cannot stand up to that kind of friction, very few materials can. In the comics his suit is specially crafted to reduce the amount of friction so that it doesn’t burst into flames at a moments notice. When the first images of Wally West from the Flash show were released my first thought was: “Why is he in leather?” Then I did research and found everyone is in leather so it’s ok? Credit where it is due though Flash and honestly Super Girl give the most care to the characters out of all of the DCEU. This may change before SHAZAM releases because it looks promising.

Where did the problems come from? Christopher Nolan is where. His Batman movies were some of the best comic films to be released during that time. They were different from anything else with the dark tone and realistic portrayals of the characters, but as Marvel started to mature with their movies and crank out great film after great film the things that made the Nolan films great became what made them not stand up and the poison to the DCEU as a whole. WB made everyone Batman after those movies came out. Hell, everyone wanted to be Batman (or the Joker) after the films came out but it was based on the edgy 1980’s Batman and not the one that was currently in the comics.

WB wants to be on top of the Superhero movie genre and they don’t understand that having people that know the characters and that will take the care to show the true character underneath will make the movies better. Look at Wonder Woman, the director took great care with the character and made a great movie despite having that DC tag on it.

DC comics along with Marvel were the things I was raised on. I grew up with these stories and learned all about them their origins and what makes them so great. DC isn’t bad it just wants to compete and the studio doesn’t care about its.

I am a writer. I write blogs, white pages, and sales articles professionally. On the side I work with fantasy and sci-fi to build interesting stories. View all posts by graysonbeane